I got an email last week from Emma (our triathlon logistics guru) saying that the boss wants me to travel with the team to Stockholm for the World Championships Series Race.  The smile on my face was promptly followed by a short and sweet email back saying I’d make sure my diary was cleared!

Sweden is pretty amazing, with more than 20 000 islands, making it the 3rd largest archipelago in the world.  It also happens to be home to some of the most spectacular looking people in the world.  The locals are definitely genetically blessed, making the trip all the more bearable!

The 10hr door to door travel had some added stress at the other end when the hotel reception had the boss and I rooming together in one double bed – now I’m 6’1”, as is the boss, and combined we weigh about 170kg and not to mention the boss is a bloke!  The look that the reception staff received when they greeted us with this was priceless.  Needless to say there was a prompt room change and 2 singles it was.

The team to be looked after was made up of 5 Aussie guys and 5 Aussie girls, 1 Canadian guy and girl, and a pleasant ring in from Chile.  With the girls first to race on Saturday this meant they had first priority for treatment on the Thursday.  It’s great to attend these kinds of races – the highest level of racing outside the Olympics.  The athletes all handle the pressure in different ways, and it’s interesting to see how they deal with the stress.  Some get chatty, some grumpy, some quiet and others in good form and more senior can treat it like just another day.

Our Aussie girls swam and rode well with 3 in a break away, all getting off the bike in good positions.  2012 Olympians Erin Densham and Emma Jackson ran into 6th and 9th respectively with their best performances of the season (handy with World Champs coming up in a month).  Natalie Van Coeverden and Barbara Riveros (from Chile) both had solid runs from the second pack to finish in the top half of the field.  Unfortunately not Charlotte McShane’s day crashing out on the first lap of the bike.

The Aussie guys played out a very similar race to the girls.  After surviving the non-wetsuit, 1500m swim (in 20.1deg water), 3 made the front pack and they managed to stay away for the 40km bike.  Aaron Royle took the run out hard with world number 1 Javier Gomez while Ryan Bailie built into his run making for an exciting finish.  Aaron ran well, just being out sprinted to finish 3rd, with Ryan also sprinting to finish 5th.  Ryan Fisher faded to 24th with Jake Birtwhistle also having a tough day on a very challenging course to finish 38th.

Post race recovery is essential these days, with the athletes often backing up to race again in 1-4 weeks.  This involves good nutrition immediately post race (protein and carbohydrate drink), an ice bath (quite often in a hotel bath) and massage.  Drug testing can be a hastle, restricting the athletes getting back to the hotel for a few hours, so being prepared for this is always a good start.  These little 1%ers’ all add up at the business end of the season.

Less than 3 weeks now til we head off to World Champs in Chicago.  Send in any questions you may have for our athletes or pass on your words of encouragement for our guys and girls via our Facebook page. 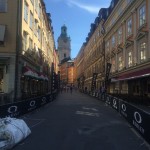 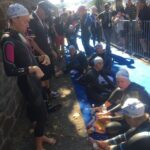 Here’s the girls trying to find some shade just minutes before the race, with Aaron Royle the next day finding some space 15mins before the swim start. 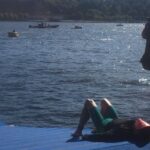 Here’s the girls trying to find some shade just minutes before the race, with Aaron Royle the next day finding some space 15mins before the swim start.

Guys swim start – close to 60 in the field all fighting it to the first buoy. 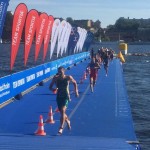 The swim exit for the boys was strung out gradually over 100m, with the front pack on the bike turning a 4m gap out of the swim into 36sec after 2 laps on the bike! 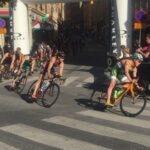 Down hill, off camber and white lines everywhere meant for some sketchy moments for the athletes. 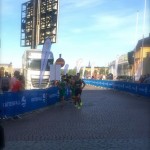 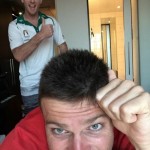 Aaron more than happy to be on the podium again!